BlazerChalet.com: What IS that thing?
Home | FAQ's | Photos Inside and Out | Other Chalets | Other Campers
Trips | Options | Tech | Paperwork | Production | Buy & Sell | Links | Contact

In the glovebox of a Blazer Chalet you should find these:

Left, the owner's manual (see Paperwork) and right, the sticker from the glovebox door. It lists all the "Regular Production Options" (RPO's) by code and description, as fitted to this particular truck. Of specific interest to us is the 16T5 Chalet Camper Conversion. You'll see many of these same RPO's on the dealer pricing sheet, showing the approximately $13,000 price tag of a new Chalet!

As many of you know I've been collecting serial numbers and manuacturing dates of the campers still in existence. If you own a Chalet or Casa Grande and haven't heard from me, please let me know!  On the back left corner of the camper is a metal plate with the serial number and manufacturing date stamped into it.

[1/1/13 Update: with the exception of this line, all the info on this page is by the former site owner Aaron S.  But to aid is spotting the above-mentioned serial number plate, see the photo immediatly below, from my former Chalet #1747  -- Russell C, current owner of BlazerChalet.com ] 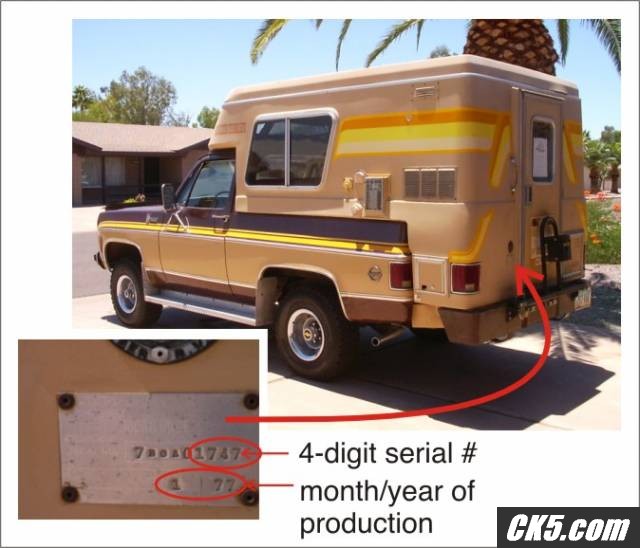 With this information, along with various magazine articles and sales brochures, I've pieced together the following timeline of the camper Blazer/Jimmy.

A 1979 magazine article places the total number manufactured at 1,780. As the highest serial number I know of is 1835, this is believable, and implies that the serial numbers are essentially consecutive (save initial prototypes). I do not have any information on 1977 Casa Grandes, but it would appear that the '76 Casa Grandes were all made in August 1976, after the Chalets of that year were finished.

Initially, production was around 100-150 units per month, stepping up later, and averaged some 200 units monthly overall. The trucks were produced only for nine months, before quietly disappearing. There are multiple theories to explain this: lackluster sales and legal issues among them.

The Chalet was popular at the time it was introduced, and some folks report that, as with many brand-new models today, consumers were paying sticker price for them (i.e. no price dickering took place.) However, the premium for the convenience of the camper may have been a bitter pill to swallow. While the camper RPO is listed as a nominal $895 option, the camper-equipped trucks almost invariably had the Cheyenne (high-end) trim package and every option GM could stick on them, so they were considerably more expensive than a base Blazer. Also, given the highly manual assembly required for small-volume specialty vehicles such as the Chalet, the cost of manufacturing was likely high enough to prevent much room for margin.

Other folks point out that the truck is awful heavy for a half-ton vehicle, and the DOT may have noticed that either the rear axle weight rating, or perhaps the overall gross weight rating, was exceeded in practice by these trucks. (Presumably GM would have had to upgrade to suspension and/or emissions equipment to be certified for the higher weight rating, which would have further driven costs up.) One story goes that the DOT offered GM the option of recalling all the trucks, or ceasing production with a "no fault, no foul" rider; if the story is to be believed, GM took this latter route and quietly dropped the model.

As of September 1975, when the 1976 brochures are printed, no mention is made of the Chalet or Casa Grande. The first time we see anything about the camper is in the April 1976 PV4 magazine article, which was presumably written several weeks earlier. It has pre-production drawings but no actual photos.

The first real photos show up in the April 1976 Blazer Chalet-specific brochure. This is approximately halfway through the model year, so the Chalet was introduced as an intermediate, or "1976 1/2", model. The pictures are nice, but are slightly airbrushed and are missing a few piecs seen on production units (one of the vents ;-)

Also by April (or maybe late March) production has started. In June 1976 GMC introduces the Jimmy Casa Grande, very briefly under the 1976 colors, and then in 1977 trim. (Considering that none were actually produced until August, that I'm aware of, this would explain the black-and-white pre-production nature of the brochures:) Around August 1976, the GMC Recreation brochure shows that 1977 trim Casa Grande.

In August 1976, Autoweek shows the new 1977 model year Chalet. Chevrolet brochures dated September 1976 show it as well. Judging from the serial numbers below, the last 1976's rolled off the line this month and production started on 1977's.

Magazine articles continued through the year, showing mostly the 1976 model, even as late as February 1977 (PV4) or April 1977 (ORV and Off-Road) issues. For their March 1977 issue, Motor Trend shows a 1977 model year unit. This must have been one of the last off the line, as the last units we know of were made in January of that year.

I'm not sure what to make of the serial numbers; while initially reasonably consecutive, they go wildly out of order towards the end, indicating some sort of problem finishing or delivering the units. Anyone with a good memory of the automotive industry of the mid-to-late 1970's is welcome to come forward with information or theories about why this occurred.

So here they are, serial numbers, by month and brand: